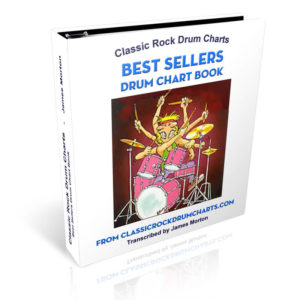 Our 100 best sellers are in this chart book, but what are the best charts to play that are off the beaten path?

Kevin and I were recently going over the orders CRDC has been receiving, and our curiosity brought us to examine the charts that you all have requested from our library the most. And that led me to thinking…

We tend to gravitate to what is known to us. Even though this is true, I am always happy to come across a song that I am not aware of, and sometimes a song like this even becomes a favorite. Often, we have our friends to thank for this.

Sometimes for me nowadays I have YouTube to thank. I love YouTube and often spend time on that site exploring bands and songs and discovering potential charts–it’s much like exploring a cave with many twists and turns (the videos are seemingly endless!).

So with these thoughts in mind, I’d like to present to you ten charts you might not be familiar with, but I have a feeling you will love playing. Each of these drum songs offers much in enjoyment, challenge, and guaranteed satisfaction. And each is available in our digital drum charts library–just click the title to go to each chart’s download page.

And now (drum roll please) here they are:

10. “Working In The Coal Mine” by Lee Dorsey

This 60’s gem from Lee Dorsey has that New Orleans flavor: a little second line feel with a slight linear component. All that fancy talk just means it is a blast to play. The drum/bass interaction is delicious.

The Cars were part of that new wave trend in the late 70s/early 80s with catchy songs like “Let’s Go,” “My Best Friend’s Girl,” and “Shake It Up.”

The whole point to new wave was a return to basic, simple, unpretentious, rock and roll – kind of the antithesis to the orchestrated, complex art- rock that preceded it. “Touch And Go,” however, was bizarre. The verse is in 5/4, with the lead vocal floating over the bar lines, while the chorus shifts into 4/4. A strange drum song that is a challenge to read, especially if you haven’t played odd time signatures much.

This 1985 release by the British veterans of heavy metal was a comeback for the band, with an album release of the same name. The verse is a hard driving 4/4, but the instrumental breaks, which come often, alternate between on measure of 4/4 and 5/4 each. On the last break, drummer Ian Paice lets go with some creative 5/4 fills which are fun to play.

A song recorded back in 1970, the band’s heyday, but left off the Led Zeppelin III album, and put into storage. In 1982, two years after drummer John Bonham’s death, it was mixed by Jimmy Page and put on the band’s Coda album. A nice funky snare drum part matched by a syncopated bass drum/hi-hat pattern. Great for the hands as well as hand-foot coordination.

6. “Crossfire” by The Scorpions

Heavy metal from Germany. Similar drumming to “Poor Tom” above (march-like snare drum with rolls against steady bass drum). Herman Rarebell is the drummer. You can definitely get your hands in shape with the above two charts. Great, quick drum songs.

5. “Expressway To Your Heart” by the Soul Survivors

“Hard times befallen the Soul Survivors,” sang Steely Dan in “Hey Nineteen.” They were referencing this one-hit group, who made it big in 1966 with “Expressway To Your Heart,” a rhythmic syncopated riff that the whole band (including the drummer) punches throughout the song. Unique drum pattern with nice fills.

One of hard rock’s most popular bands, “Wild Side”Ê is a hard driving, slamming song with a two-handed 16th note pattern that transitions into a hard shuffle on the chorus. The change of feel in the song is great training for anyone. Tommy Lee drums on this 1987 recording.

Oh man do I love this song. This 1968 recording comes after their first big hit “The Letter,” and has everything in it: soul, horns, a bluesy vocal by Alex Chilton, cool drumming, changes of feel and groove, and even an electric sitar! The whole decade in one song. Get it and play it.

I have an informal list in my mind of drummers I would like to borrow from and emulate — drummers whom if I could play like I would know I had it together. Roger Hawkins, the drummer at the time for many great Muscle Shoals recordings, is definitely on that list. This all-time soul classic by the Queen of Soul is burning from start to finish. After working on this chart, maybe you’ll add Roger to your own list.

1. “Late In The Evening” by Paul Simon

Paul Simon has had the good sense to surround himself with world-class professional musicians throughout his recording career. One of those musicians was Steve Gadd, who had already graced a Simon hit, “50 Ways To Leave Your Lover,” with a pattern that had many drummers scratching their heads (mine included). “Late In The Evening” features a latin-tinged pattern around the drums that is exciting to play. When you hear the recording, don’t be dismayed — the pattern is not that difficult to learn. You basically learn a sticking pattern and apply it to different parts of the set. Come on, you can do it!

There you have it. My top 10 greatest drum charts you have never played. If you are adventurous and want to expand your knowledge and experience, do yourself a favor and take a look at these drum songs. You won’t be disappointed.