My family has known Dave Uosikkinen for the majority of my life. Growing up, his son Sam Uosikkinen and I became really great friends, a friendship that continues to this day as Sam pursues his own music career while rockin’ at the Musician’s Institute in Hollywood. 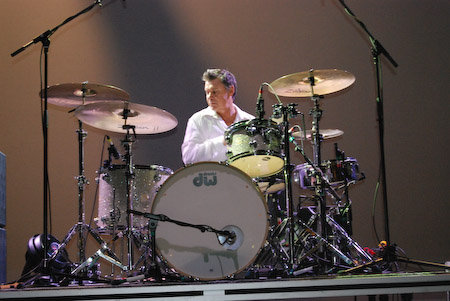 Friend and world-class drummer Dave Uosikkinen has made a website where artists who wouldn’t be able to afford a full studio session can get access to top-notch, custom made, studio-quality drum tracks.

It didn’t take long for Sam and I to realize that our dads were coincidentally both professional drummers. Dave, the percussionist and founding member of the multi-platinum group The Hooters (named “The Best New Band Of The Year” in 1985 by Rolling Stone magazine), was a world-class drummer who had achieved fame and success, but I wouldn’t know the full extent of it just by hanging around him as I grew up.

Because more than that, Dave is also a world-class guy. A friend’s father who I could look up to and who I learned to expect nothing but humble kindness and fun conversation with, from third grade on up into my teenage years.

Now Dave has recently launched an innovative new website, DaveUDrums.com, where he’s made world-class drumming accessible to recordind artists at any level. Harnessing the opportunities technology allows us, he gives anyone the chance to send in a song and have him lay down a completely customized drum track to it.

Coming from a seasoned studio drummer who has backed and performed with Rod Stewart, Cyndi Lauper, Patty Smyth, Taj Mahal, Alice Cooper and other big names, this is a huge chance for some up-and-coming artists to show that they mean business with a world-class name on their tracks.

Get a taste of Dave and how Dave U Drums works with the video below.

My family and I were friends with the Uosikkinen family before I realized that Dave and I were fellow drummers. Not only that, but Dave had a great career that is continuing still. 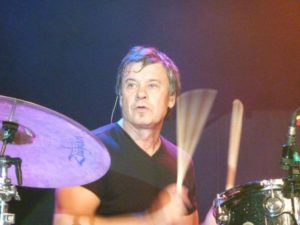 If you remember the ’80s band The Hooters, you’ll also remember the great catchy hits they had, like “All You Zombies,” “And We Danced,” “Where Do The Children Go,” etc. I loved their clever use of different instruments. (Note to self: I’ve got to get a Hooters chart on classic-rock-drum-charts.com, since I can get it straight from the drummer himself).

Well, Dave and the band are still touring (just wrapped up their 30th anniversary tour through Europe), and they have a new album out.

Dave also has a new web site that is unique and a service to all recording artists and writers. On DaveUDrums.com, he offers himself as a session drummer for recording projects, and his tracks can be delivered to you digitally on the internet. Dave has a great discography, and his drum sound is world class. I urge you to check out his site.