My Account
0 Items
My Account 0 Items
Use code THANKFUL22 to get 50% off all products, including the Complete Library! Valid thru Monday 11/28

Using Drum Charts To Get Over The Hump To Success: A True Success Story

Michael was a solid drummer and a veteran of the Top-40 band circuit. When he came to me for lessons, I was a bit surprised, because he was such a strong musician in an established band. His story is as follows.

He had done the clubs for several years and was looking down the road to his future (he wasn’t a kid). He had a contact in a recording company in Nashville, and thought if he could get his reading chops up to a decent level, he could break into a recording/touring career. 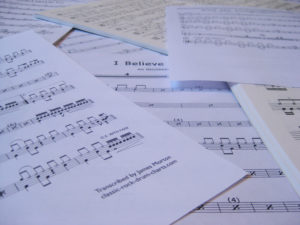 At the outset of our lessons his reading level was really low, about 10%. What did we do? I simply had him read and play along to chart after chart. Since his ear was already sharp, the practice of seeing the notes on the transcriptions, as he played and heard them, slowly brought up his average.

Weeks before his departure, he started coming in twice a week, and every day during his last week.

By the time he left, his reading was nearly 100%, and mostly due to reading drum charts persistently.

Michael got a day job the same day he landed in Nashville. A few weeks later I talked to his wife on the phone. She told me he had already recorded a commercial. But wait, here’s the best part:

Six month’s later I saw his name in Modern Drummer, where it was noted that he was touring with an established artist! To this day, Michael is still based in Nashville recording with other artists, and touring as well.

If you knew Michael, you would know that as far as his success went, it was 90% driven by him. I added a little bit with my charts and instruction.

His own personality and ambition, sprinkled with talent, drove him to add one more tool in his musical toolbox: reading (a pretty important one at that!). For more on this idea of sharpening your musical toolbox, check out this article about honing your skills.

I sincerely wish for you the same success Michael found with help from my drum charts.